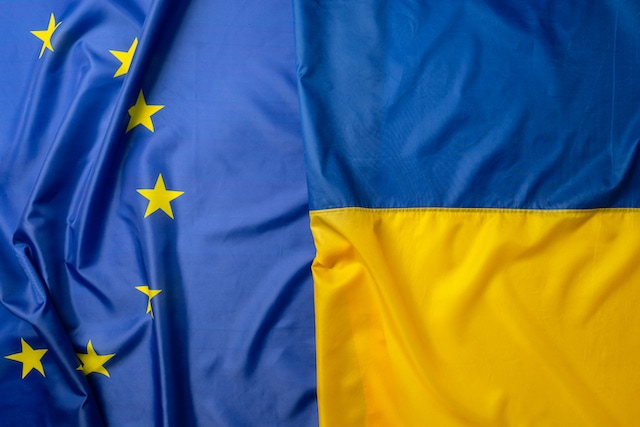 Despite the ongoing war, Ukraine is stepping up its efforts to move closer to the European Union (EU). This week, as part of a political punctuation, it became known that the country should be admitted to the EU. Cooperation with European institutions and associations has a crucial role to play here. At the same time, Ukraine is also stepping up its activities in the field of blockchain technology. As it also became known this week, the country is expanding its transnational network partnership in this area. The accession of Ukraine to the European Blockchain Partnership (EBP) underlines the efforts to integrate the country into the (digital) economic space of the EU.

In April 2018 21 EU members and Norway have joined forces and founded the European Blockchain Partnership. In particular, European blockchain projects are to be supported. In the meantime, other non-EU countries have joined the alliance, including Liechtenstein. With Ukraine, the third (not yet) EU country follows. The partnership has a total of 27 members.

According to the Digital Strategy of the European Union in the future, the future of public administration will be supported by blockchain technology.

“In the future, all public services will use blockchain technology. Blockchain is a great opportunity for Europe and Member States to rethink their information systems, promote user trust and the protection of personal data, contribute to the creation of new business opportunities and establish new areas of leadership that benefit citizens, public services and businesses.“

By participating in the EBP Initiative, those responsible in Kiev hope to receive support for reconstruction. According to the country’s correspondence to EU Commission President Ursula von der Leyen, blockchain technology could become an integral part of the reconstruction. The technology could facilitate the cross-border provision of services after the end of the military conflict.

“The EBP will accelerate this reconstruction and support the further integration of Ukraine into the EU.“

Before Russia launched its military invasion in late February, Ukraine was in the process of comprehensively regulating cryptocurrencies. The country is the leading nation among the Eastern European countries when it comes to the adaptation of technology. And despite the state of war, the parliament passed a corresponding law in March this year. In addition, since the beginning of the war, the country has been using the opportunity to receive donations in the form of cryptocurrencies.

Ukraine is in test mode

Currently, Ukraine is still in the testing and observation phase. However, Ukraine is striving for full membership in the EBP as soon as possible.

“The next step is the full blockchain integration of Ukraine and the EU on the basis of EBP/EBSI initiatives.“

By applying the technology, Ukraine wants to provide its guarantors with various public services. This includes the verification of educational and identity documents, as well as the support and registration of refugees or asylum seekers. The smart contract function of the blockchain can guarantee the best transparency and counterfeit security here. This approach could not only support the people seeking help, but also facilitate and speed up cumbersome bureaucratic processes. The added value created from the crisis could thus become the driver of progress.

Any cooperation at the European level is based on a uniform, joint decision. Likewise, blockchain technology and the corresponding cryptocurrencies must therefore be regulated. Only in this way can a uniform procedure and a real utilization of the technology be guaranteed.

The EU Commissioner also announced that she wants to discuss a proposal on “Markets in Crypto Assets” (MiCA) with the French government:

“MiCA rules will be the right tool to address the concerns regarding consumer protection, market integrity and financial stability. This is something that is so urgent in light of recent developments.“

After the first regulatory efforts were voiced by the US in the previous week, the EU is following suit as so often. The problems surrounding TerraLuna and the recent liquidity crisis at Celsius are pushing political actors to take action. This development is to be viewed positively. The current uncertainty in the market can be reduced by regulatory efforts in the future. This in turn promotes the adaptation of the industry.

Thus, the wide possibilities of blockchain application are also evident in connection with the crisis situation in Ukraine. Blockchain and cryptocurrencies have come to stay. There is rarely a better way to get started than to buy cryptocurrencies at the moment.